Peter Sculthorpe was Australia's foremost composer, and the first to create a truly Australian musical voice.  It was on his return from studying in Oxford that Sculthorpe decided that his western musical heritage needed to make room for other influences, and these included aboriginal meoldies, the sounds of nature, and elements from neighbouring Asian countries.

Pieces such as the 1960s series Irkanda - “scrub country’ and Kakadu (1988) established him as the country’s leading painter of landscapes in sound.  The vastness and silence of the outback, or the thronging of Australia’s wetlands, became his primary influences.  He, in turn, became an environmental activist, contrasting the aboriginal peoples’ sense of being part of nature with the negative impact wrought by the arrival of Europeans.

He worked closely with aboriginal musicians, notably didjeridu virtuoso William Barton, for whom he wrote Earth Cry, a piece that exploits traditional imitative music to invoke the sounds of wildlife such as magpie geese.


Barton wrote of his friend and kindred spirit: "As I sit here at the Arthur Boyd retreat three hours south of Sydney peacefully playing on the piano listening to nature. The birds singing, kangaroos hopping and wombats settling in for the night. The motor for the water tank kicking in every time you turn the tap on for water at the musos Cottage. outside of mobile signal, although have internet connection. Whispers of the wind follow.

"I saw a post on Facebook from various friends and newspapers. Only last week I thought to call Sculthorpe, but thought he may need the rest so we could all visit and say gday when he was stronger. Well that time has passed and gone. Thank you Peter my friend for giving Australia and the world the opportunity to discover a soundscape through your music and beyond. Take care mate see ya on the other side some day. Will"

he was acutely aware of the Australian outback

I contacted Edward Cowie, a British composer who spent several years working in Australia.  He wrote "not since the death of John Antil has ANY Australian composer done more to ensure that the rest of the world not only knows good Australian composers exist, but that its magnificent wild places have a special inspirational gravitas of their own! Oddly enough, Peter was a city-person, that is - lived in one and enjoyed its cultures and challenges. But he was also acutely aware of the great Australian outback and often captured its influences within his music, none more so than in his Kakadu which I think might have made even Sibelius happy!

"He was deadly serious about music, though not once did he let his expanding and deepening fame trouble him into some kind of vanity. He was always good-humoured, generous and above-all self-effacing.

"I'm saddened by his death but we still have a legacy of a sensitive and curious mind!!"

The work is concerned with my feelings about this place, its landscape.....

As the Australian Music Centre explains, to the first European settlers much of the landscape seemed extremely alien.  Music was a means of insulation rather than a celebration of the new country. This attitude persisted, with notable exceptions like Henry Tate’s advocacy of birdsong in the 1920s, and sporadic attempts by Percy Grainger to depict Australian environments in music.  It was Peter Sculthorpe who first established a connection to landscape that was not influenced by English pastoralism.   Sculthorpe’s influence lives on through the composers he taught.  One of Australia's best known composers, Ross Edwards, studied under Sculthorpe.  Like his former teacher, Edwards seeks to reconnect music with elemental forces and restore its traditional deep connection to the land, from whose natural environment it draws inspiration - especially birdsong and the mysterious patterns and drones of insects. 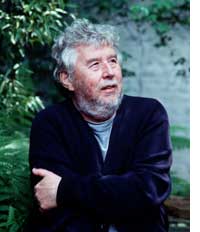 Harrison Birtwistle, whose 80th birthday is being celebrated this year, is among Britain’s finest living composers.  His interest in moths dates back to his teenage years when he was fascinated by their mysterious existence and understated beauty. The Moth Requiem’s text includes at its centre The Moth Poem by US-Canadian poet Robin Blaser (1925-2009).  It is a description of a moth trapped inside the lid of a piano at night, and the author’s search for the source of the mysterious sounds it creates.

Around the core text the singers sing the scientific names British moths, some common, others on the brink of extinction. Birtwistle’s scoring splits the voices into two six-voiced choirs, while the moth’s nervous agitation, and the eerie, fragile sounds created as it flutters among the piano strings, is realised through the distinctive scoring for alto flute and harps. The instruments weave around the fragmented Latin texts, and Birtwistle creates a sound world that despite occasional fierce outbursts, maintains a sense of fragility and mystery in this highly individual Requiem.

Harrison Birtwistle’s work for twelve female singers, three harps and alto flute, The Moth Requiem, was premiered in Amsterdam in October 2012.  The BBC Singers and Nash Ensemble have recorded the work on the Signum label along with The Ring Dance of the Nazarene and other Birtwistle choral music.
In conversation with Fiona Maddocks, whose Harrison Birtwistle: Wild Tracks – A Conversation Diary was published by Faber & Faber in May , Sir Harry explained his childhood interest in moths.  “I've always thought that if I had more time – one of those things you always think – I'd have found out more about them, but I've never succeeded. I've just read about them as an amateur.

“There used to be a thing on children's radio, a natural history programme. The entomologist was someone called L.Hugh Newman, an old-style naturalist. He had a butterfly farm in Bexley, Kent. I remember writing to him, aged about 12, and got a funny typewritten answer. Then I got a catalogue, and you could buy all the butterfly and moth equipment. I got a butterfly net, and a thing called a relaxant tray which is a tin box with some sort of jelly in the bottom. Once they were killed they would be "relaxed" and you could set them on a cork board. I did all that. It was mostly moths. There weren't many butterflies around that area of the north [Accrington, Lancashire] at that time”.

"...very personal, and a metaphor for things that are no longer here..."

In 2011, while Moth Requiem was still a work in progress, BBC Radio ran a programme about moths and the people who enthuse about them, including an interview with Harrison Birtwistle.  Click the button to hear the programme.
Requiem for a Moth