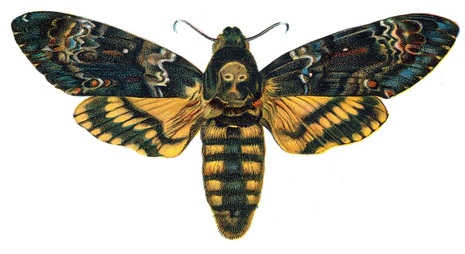 When I was growing up we had a concrete doorstep that jutted out like a shelf from the sill of our front door.  There was a space under the doorstep where things sometimes appeared, leaves or bits of rubbish blown on an eddy and becalmed.  I don’t know what made me look there one day – I suppose I was about ten - but what I found left an indelible image in my mind.

Specifically, the image of a human skull.  It was not a skull I found, but the image of one, appearing as though embroidered, or appliqué perhaps, between the wings of a creature that looked like it belonged to the night.  This angel of death was itself dead, but I dared not touch it, and hardly dared look at it for long.

Even at that age, my curiosity for the natural world overcame my fear and I somehow managed to get it into a box and into the light for closer inspection.  I knew next to nothing about moths, but I knew exactly what this creature was.  I owned a one-volume encyclopaedia of the animal kingdom, a fat and rich tome filled with black and white photographs.  The few colour pages were reserved for peacocks and red pandas and salamanders.  I knew every species in the book, and even in monochrome, the death’s-head hawk moth was unmistakeable.

More than forty years on, that corpse remains the only Acherontia atropos I have ever seen.  Every summer I, like thousands of others, await those balmy, moonless nights when the air and the grass are inhabited by a silent throng that seems only to exist after dark, as if from a parallel universe.  We would know nothing of their world were it not for their addiction to the bright lights we have introduced into it; otherwise, we would step outside each morning, oblivious.  We might occasionally wonder what could have produced the strange, gauzy wings that you find from time to time in the grass or on the surface of a pond, like petals off an absent flower.  Only in modern times have we dared watch for ourselves what goes on at night, to observe the left-overs from a bat’s dinner spiralling to earth.

Every year I recall how to identify some of the species and enjoy having to relearn many more.  I enjoy their strange names, attributed with considerable humour and affection by Victorian gentleman-naturalists.  Every Wednesday morning I wait for the team at Titchwell RSPB reserve to open the Robinson trap that has been spraying ultra-violet light into the night, and for the experts to remind me again of the names of the beautiful insects we are finding.

I wonder if among the poplar kittens and the July high-flyers and the buff ermines and the burnished brasses a face, a fleshless, eyeless face will appear on the back of a behemoth of a moth and I’ll see my second-ever death’s-head.

Laurence explores the strange nomenclature of moths in his poem Names of Moths that Probably Don’t Exist, along with new poems from Matt Howard and Rosie Evison on our Words page.

Harrison Birtwistle's Moth Requiem, and the fascination for moths that inspired it, is featured on our Music page, along with a video of the full piece, and a radio interview with Sir Harry and other moth enthusiasts.

Moth Night on 3-5 July was a huge success by all accounts.  If you're in the USA - you still have Moth Week to come 19-27 July!
National Moth Week USA